Thank you for your patience while we retrieve your images.

The 26th Annual Ambassador's Ball was held at the Sheraton Austin Hotel at the Capitol on Tuesday December 23, 2014. 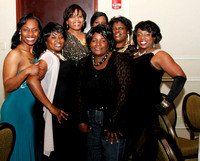